IAWP Statement on Suspected Chemical Weapons use by Indonesia

International Academics for West Papua (IAWP) is deeply concerned by reports that white phosphorus, a prohibited chemical weapon, has been used by the Indonesian military on civilians in West Papua.

Indonesia has dismissed these reports as ‘fake news’ but has not responded to photographic evidence, and continues to deny access to West Papua to international observers, humanitarian aid agencies, NGOs and journalists, thereby preventing an impartial investigation.

Reports of the use of chemical weapons on civilians require urgent investigation by the United Nations and the Organisation for the Prevention of Chemical Weapons. We call on the Indonesian military to immediately give access to observers and to cease the escalation of violence which, according to the International Coalition for Papua, has ‘resulted in the killings of indigenous civilians and the displacement of hundreds of villagers’. Reports are emerging that the conditions of many of the refugees is deteriorating and some, including children, have already died due to their ongoing displacement.

In addition to these attacks, in the past weeks Indonesia has launched a brutal crack down on the West Papuan independence movement, charging peaceful activists with treason, raiding and shutting down headquarters of independence organisations. International Academics for West Papua believes that ignoring the political grievances of the West Papuan people will only worsen the situation, and that the Indonesian government and the international community must instead pursue a more constructive approach. In particular, we call on the international community to recognise the historic injustice of the 1969 ‘Act of Free Choice’, by which West Papuans were coerced into joining Indonesia, and to facilitate a resolution of that injustice in line with the wishes of the Papuan people. 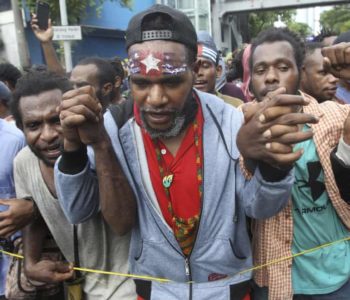